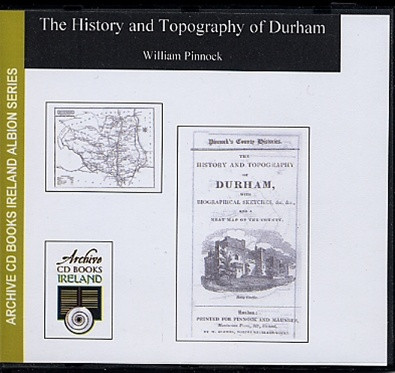 The History and Topography of Durham

Undated, but first published in about 1820 and republished here on fully-searchable CD-ROM is the Durham edition in William Pinnock's County Histories series. Carrying the full title "The History & Topography of Durham with Biographical Sketches, etc., and a Neat Map of the County", this lovely little 71-page history and topography for Co. Durham was printed in the Strand, London, for Pinnock and Maunder.

William Pinnock (1782-1843) began life as a school teacher in Hampshire before moving to London where he set-up a book publishing business with his brother-in-law, Samuel Maunder. Pinnock and Maunder are best-remembered for the publication of their educational 'catechisms', which were issued between 1837 and 1849, eventually containing some 83 parts. The catechisms took the form of short, popular and cheap pamphlets or manuals, which were arranged in the form of question and answer on many different areas of popular and perhaps less popular and well known knowledge; the standard price for these publications would appear to have been nine-pence. Extremely popular and successful, Pinnock and Warner followed these with abridged editions of Goldsmith's histories of England, Greece and Rome and their series of county histories. Pinnock and Maunder also published the Literary Gazette for a number of years. Samuel Maunder continued publishing in his own right after Pinnock's death in 1843, mainly education dictionaries on many subjects, which were again extremely popular at the time of their publication.

The frontis-piece to the History and Topography of Durham consists of a county map showing the county's mail coach roads, turnpike roads and canals. The map also delineates the cities, market towns and villages in the county as well as marking and naming the main gentlemen's seats. Like Pinnock and Maunder's catechisms, the History and Topography of Durham also takes the form of question and answer, with the first page beginning with: Question. 'What is the situation of Durham'. Answer. 'Durham, which is a county Palatine, possessing great and extensive privileges, is bounded on the east by the German Ocean, on the north by Northumberland, on the west by Cumberland and Westmoreland, and on the south by Yorkshire'.

Beginning with a physical and geographical description of the county, the History and Topography of Durham proceeds to Gateshead and surrounding areas, providing topographical descriptions and statistics on the town and surrounding villages as well as the better-known gentlemen's seats in the vicinity. Also mentioned are fascinating records of local history and custom associated with places mentioned, such as Hawthorne Dean, its beacon and the celebration at harvest time of Ceres, the goddess of Corn, whose effigy was paraded through the corn fields to great acclimation and merriment, followed by the feast of Mell-supper.

The History and Topography of Durham is completed by a biography of celebrated men from Durham, such as William Emerson, the Venerable Bede, Sir John Baliol as well as a list of the county fairs and market days and rare plants and where to find them in the county. A lovely little publication that is sure to inform, entertain and surprise.