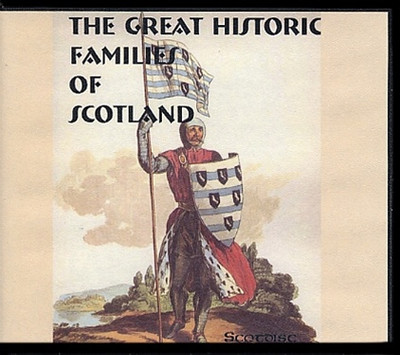 The Great Historic Families of Scotland

Originally published in 1883, and produced as a large two volume set, James Taylor's selection of great historic families concentrates upon those which have played a major role in the long and often controversial history of this small but fascinating country in the north of Britain. Taylor is noted not only for his historical and genealogical accuracy but also for his well-written story of men and women who are of interest. You will find yourself reading a section on a particular family and then racing ahead to find out how that family fared and what indeed happened to that ill-fated Earl or Duke whose adventures were most certainly not wise!

This CD contains scans of the original books and it can be browsed, enlarged and printed if required. But please note: this CD is not searchable.

Contents of Volume Two (CD 2)
The Maxwells
The Johnstones of Annandale
The Stewarts of Traquair
The Drummonds
The Strathallan Drummonds
The Erskines
The Erskines of Buchan and Cardross
The Erskines of Kellie
The Grahams
Thomas Graham, Lord Lynedoch
The Grahams of Esk, Netherby, and Norton-Conyers
The Scotts of Buccleuch
The Scotts of Harden
The Hepburns
The Frasers of Lovat
The Frasers of Philorth and Saltoun
The Gordons
The Gordons of Methlic and Haddo
The Gordons of Kenmure
The Gordons of Earlston, Gight etc.
The Hays of Errol
The Hays of Tweeddale
The Hays of Kinnoul
The Maclellans of Kirkcudbright
Addenda
- Earldom of Menteith
- The Angus Douglases
- The Last Earl of Wintoun
- The Campbells of Argyll
- The Two Beautiful Gunnings
- The Erskines of Kellie
- The Family of the Hays