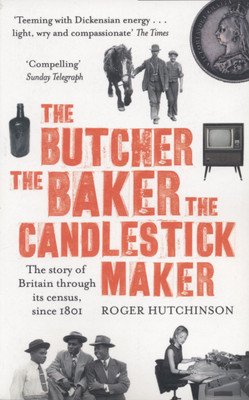 The Butcher, the Baker, the Candlestick Maker: The Story of Britain Through its Census Since 1801

"The Butcher, the Baker, the Candlestick Maker" is a witty, insightful and surprising history of modern Britain, narrated through the colourful stories of the men and women who forged the country.

At the beginning of each decade for 200 years the national census has presented a self-portrait of the British Isles.

The census has surveyed Britain from the Napoleonic wars to the age of the internet, through the agricultural and industrial revolutions, possession of the biggest empire on earth and the devastation of the 20th century's two world wars.

In "The Butcher, the Baker, the Candlestick Maker" Roger Hutchinson looks at every census between the first in 1801 and the latest in 2011. He uses this much-loved resource of family historians to paint a vivid picture of a society experiencing unprecedented changes.

Hutchinson explores the controversial creation of the British census. He follows its development from a head-count of the population conducted by clerks with quill pens, to a computerised survey which is designed to discover 'the address, place of birth, religion, marital status, ability to speak English and self-perceived national identity of every twenty-seven-year-old Welsh-speaking Sikh metalworker living in Swansea'.  All human life is here, from prime ministers to peasants and paupers, from Irish rebels to English patriots, from the last native speakers of Cornish to the first professional footballers, from communities of prostitutes to individuals called 'abecedarians' who made a living from teaching the alphabet.

"The Butcher, the Baker, the Candlestick Maker" is as original and unique as those people and their islands on the cutting edge of Europe.