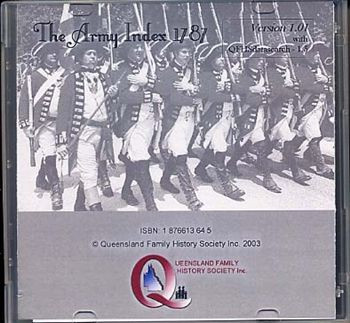 The Army Index 1787: An Index to the War Office 1787 List of Officers of the British Army and Marines and Officers on Half-Pay

It improves on the microfiche version by enabling direct searching of the index on name, rank and regiment using the newly developed QFHSdatasearch technology.

The index covers name, title (where given), rank, regiment, whether cavalry, infantry, or on half-pay, and the page reference. Additional items in the book are dates of attaining current rank in the regiment and army (not for half-pay officers), dates of attaining various ranks for General and Field Officers, dates of disbanding or reducing regiments (half-pay officers), and agents for the regiments.