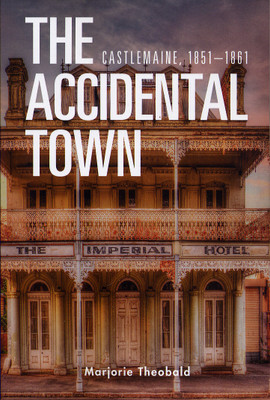 Castlemaine owes its existence to the alluvial gold rushes which began in 1851. To cope with the crisis, Governor La Trobe established four Gold Commissioners’ Camps – at Castlemaine, Bendigo, Ballarat and Beechworth. While many centres of mining dwindled to names on the map, these administrative centres developed into permanent towns. Castlemaine was at first a ramshackle village known as the Canvas Town clustered around the Camp.

After the first land sales in 1853 the town began to take shape. The first hotels were licensed in 1853, schools came out of tents and into buildings, the churches built substantial places of worship, administrative functions such as the Post Office and the Court House were moved from the Camp to the town. Local initiative built the Hospital, the Gas Works, the Mechanics Institute and the Benevolent Asylum.  Several foundries flourished, servicing the mining industry and the construction of the railway line. Castlemaine was declared a municipality in 1855. The first decade is rich in characters and egos. They were astonishingly young, assertive and determined to shape a better way of life.

‘The Accidental Town’ recreates an era when Castlemaine was poised precariously between a mining camp and a settled town.

Contents:
A Personal Apology to the Dja Dja Wurrung People
Acknowledgements
Abbreviations
Introduction: 'They Are Still Here if we Sit Still and Listen'
A Personal Reflection on a Difficult Journey
1. Let the Wild Rush Begin: The Alluvial Gold Rushes 1851-1854
2. Carving a Town from the Bush: Survey, Sales and Speculators
3. A 'Hole-in-the-Corner' Affair?: The Difficult Birth of the Municipality of Castlemaine
4. 'In Ruined Mass the Drama's Temple Fell': Diggers, Divas and Disasters at the Theatre Royal
5. The Failure of Company Mining in the Castlemaine District: A Cautionary Tale
6. 'The Working Man Here is at Par with his Neighbours': The Workers of Castlemaine Versus the Railway Tycoons
7. Magistrates, Monsieur Rolland and Miners in Muddy Boots: A Publican's Lot in Early Castlemaine
8. Building a Town: Building a Community
9. Keeping an Orderly Tent: Keeping an Orderly House
10. 'That Righteousness Which Exhaleth a Nation': Building the Churches, Building the Faith
Appendix 1. Registered Company Mines in the Castlemaine District 1856-1859
Appendix 2. Auction notice for the Forest Creek Gold Mining Company 1859
Appendix 3. Report of the Old Specimen Gully Quartz Mining Company 1859
Appendix 4. The Castlemaine Railway Foundry
Appendix 5. Occupations by Gender, Municipality of Castlemaine 1857 and 1861
Appendix 6. Occupations, Municipality of Castlemaine 1857 and 1861
Appendix 7. The Governor Sir Henry Barkly Visits the Chinese Village at Guildford
Appendix 8. Laying the Foundation Stone of the Benevolent Asylum
Appendix 9. List of Shareholders in the Castlemaine Gold Mining Company 1858
Notes
Select Bibliography
Index