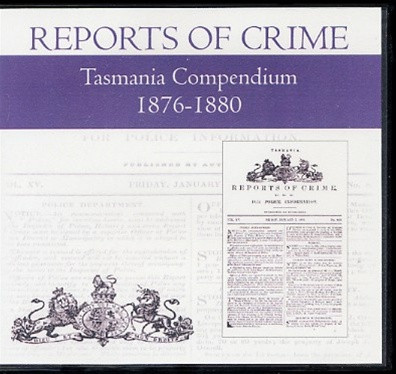 Police Gazettes are a unique, useful and extremely fascinating resource for local, family and social historians and researchers in other fields throughout Australia. Compiled to be distributed amongst the Police Force only, these Gazettes contain details and information that can not be found anywhere else.

They include lists of warrants issued, changes in the police force which are all listed (promotions, demotions, resignations, dismissals, retirements, deaths etc). Information is also given on housebreak-ins, robberies, arson, murders, lost horses and cattle, deserters, escaped prisoners, missing friends, and reports on those released. Notices from interstate police gazettes are sometimes included.

This CD contains five years of Tasmania Police
Gazettes from 1876 to 1880 all on the one CD, at a very special price.

Example entry taken from the 5 January 1877 issue:
Missing Friends
Information is requested respecting a woman named Mary Ann Adams, who was transported from Surry, England, about 32 years ago. She subsequently married in this Colony a convict names William Neigheny. Communicate with this Office.

Example entry taken from the 8 March 1878 issue:
Hawkers' Licences
Hawkers' Licences, under the provisions of the Act of Council of this Island, 6 William 4th. No. 7, have been issued by me to the under-mentioned persons during the month of February, 1878:

No. of Licence     Name
District where residing

Example entries taken from the 28 March 1879 issue:
Inquests
An Inquest was held at Glenorchy, on the 19th instant before Henry Bilton, Esquire, Coroner, on the body of Robert Hampden, better known as Black Bob, about 59 years of age, F.S., per Rodney or Fairlie. Verdict:- "Died from natural causes, to wit, disease of the heart, aggravated by taking stimulants in excessive quantities".

An Inquest was held at St Mary's, Fingal, on the 26th instant before Henry Dawson, Esquire, Coroner, on the body of John Niel, aged 73 years, free, ship unknown. Verdict:- "Suicide, by hanging himself on the 24th instant, in his house near St Mary's".

Example entry taken from the 20 Feb 1880 issue:
Warrants Issued
New Norfolk - On the 17th instant, by W.A.B. Jamieson, Esquire, J.P., for the arrest of Alice Pearce, charged with having, on the 9th instant, at Bushy Park, left her female child without means of support. Description: About 30 years of age, ruddy complexion, freckled sharp features, wife of James Pearce, charged with tin robbery (vide Crime Report on the 9th and 30th ultimo). She was recently in Hobart Town, and may have gone to Launceston, where he brother, William Sullivan, is in gaol.

A vast resource of information on people and events in Tasmania during the 1876-1880 period. The CD contains high quality scanned images of the whole of each years' issues. This CD has been bookmarked for easy navigation, and pages can be searched, browsed, enlarged and printed if required.