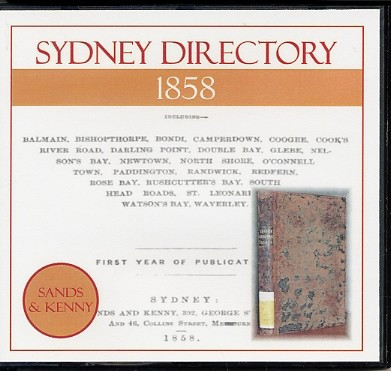 What is a Directory?
In general terms a directory is an extended version of our current day white pages and yellow pages combined (without the telephone numbers). They list many thousands of names, occupations and addresses ... but also so much more.

What information does this Directory contain?
John Sands formed several partnerships in Sydney and Melbourne. One was with his brother-in-law Thomas Kenny, and together they produced an number of Sydney Directories. 1858-59 was the first year publication for the Sydney Directory by Sands and Kenny. This commercial and general directory is divided into various sections: Street directory, Suburban directory, General Alphabetical directory, Trades and Professional directory, Official, Legal, Clerical and Collegiate directory, Medical directory and more.

How can this Directory help me?
A directory can not only give you the name, street address and occupation of a person, but you can find out more about the place in which they lived, their neighbours, the local stores of the time, what goods and services cost in that era. You can find out details of the local churches, clubs and societies. Where the local banks were and who were the doctors in the area.
- The alphabetical section lists the names of each head of household and their street address. In many cases their occupation is also listed.
- The suburban and street directories lists individuals and businesses alphabetically by name of street and number for the larger populated regions.
- The trade and professional directories contain information on businesses and companies, listed alphabetically by trade.
- The advertisements are a useful source of information as well.

ALSO AVAILABLE AS AN EBOOK:
Sydney Directory 1858 (Sands and Kenny)