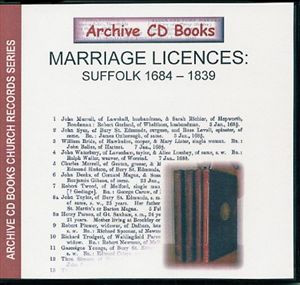 The full title of this publication is "Allegations for Marriage Licences in the Archdeaconry of Sudbury in the County of Suffolk 1684-1839", and it was published by the Harleian Society 1918-1921 in four volumes. The very first entry in 1684 reads: John Murrell, of Lawshall, husbandman, & Sarah Richier, of Hepworth. Bondsman: Robert Garland, of Weltham, Husbandman. 3 Jan., 1684/5. This class of records are incredibly valuable to the family historian, as prior to 1837 marriages in parish registers did not state the father's name, and also rarely stated an occupation of the groom.

It is well worth noting that there are many people here who were from outside the county of Suffolk, so these records will appeal to a wide range of researchers. The four books are arranged in date order and are fully indexed for names.

It is records such as these that are of immense value to family historians! A couple, one from Herefordshire, the other from Gloucestershire, who were issued with a licence in London to marry in a parish church in Monmouthshire, Wales. That will certainly knock down the brick wall in someone's research. It isn't at all difficult to find such instances. The books are full of them!