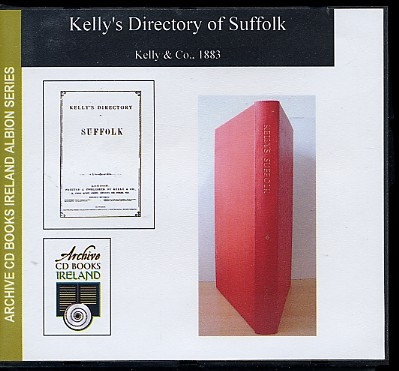 This directory includes every parish in the county and provides a thorough topographical description of every town, parish, village and township, describing the principal buildings and geographical objects of interest in each. Great care is also taken in Kelly's treatment of the ecclesiastical divisions of the county with descriptions of all the churches, cathedrals the value of the livings, parochial incumbents and patrons. The same level of detail is provided for the civil and local administration of the county with full information on county courts, districts fairs, markets, county hunts as well as communications such as rail and post throughout the county.

Beginning with Acton and ending with Yoxford, for those who might be unfamiliar with a directory such as Kelly's the degree of information contained on each village can be gleaned from the description of just one of the places entered in the Towns and Villages section of the directory.

Tattingstone is described as a village and a parish one mile from the nearest railway station of Bentley and 5½ miles from Ipswich. Situated in the Eastern Division of the county, Samford Hundred, Union and rural deanery Samford the archdeaconry of Suffolk and Diocese of Norwich. The parochial church of St. Mary was described as a rubble building in the decorative style consisting of a chancel, nave and square tower housing five bells. The parish register dated from 1654. A Wesleyan Chapel could also be found in the parish. The Union House at Samford, was a plain red brick building constructed in 1765 and could house 200 inmates. Lord T. C. C. Western, Bart, was the Lord of the Manor and chief landowner in the parish, which included Tattingstone Place. A large brick mansion, this was situated in a well-wooded park that also contained a large lake and extensive fishponds. Occupied in 1883 by Richard Oliverson, Esq., this was formerly the ancient seat of the Beaumont family. The main produce of the parish were wheat, barley and turnips and the soil described as light, with a subsoil of gravel and sand. The parish of Tattingstone contained 1,637 statute acres and at the time of the 1881 Census contained 535 occupants inclusive of the Union Workhouse. Included in the entry for Tattingstone are details of the parochial educational establishments, post office, carriers and principal local residents and commercial interests. While the village and parish of Tattingstone are relatively small, the level of detail recorded in the directory are typical, with a much greater degree of information provided for the larger towns and cities in the county, especially that for Ipswich, which includes street directories and listing for private residents and commercial interests.