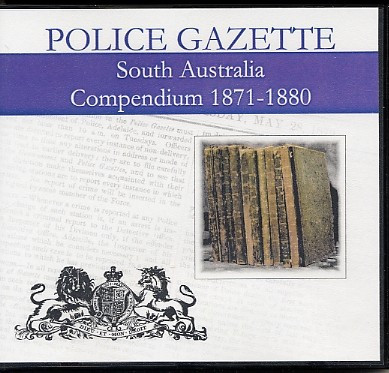 If you had family living in South Australia in the 1870s, have you thought of looking at the Police Gazettes for information? These are an historian's goldmine of information. Compiled to be distributed amongst the Police Force only, these Gazettes contain details and information that can not be found anywhere else.

Far from just listing those who were in the Police Force, or those that were on the 'wrong side' of the law - you will also find entries of missing persons, or they might be a witness to crime, or they may have had something stolen from them, or they may even have found an item, and reported it to the Police.

Issued once a week, you will find information on housebreak-ins, robberies, arson, murders, lost horses and cattle, deserters from families and also deserters from service, inquest verdicts, escaped prisoners and reports on those released ... as well as some information from interstate police gazettes ... and so much more. This CD-ROM contains all issues that were released during 1871-1880 on a single CD, and at a very special price. The CD has been bookmarked for easy navigation, and pages can be searched, browsed, enlarged and printed if required.

This is an immense South Australian resource, now available on fully-searchable CD-ROM for the first time.

This CD contains high quality scanned images of the whole of each year's issues. It has been bookmarked for easy navigation. and pages can be searched, browsed, enlarged and printed out if required.