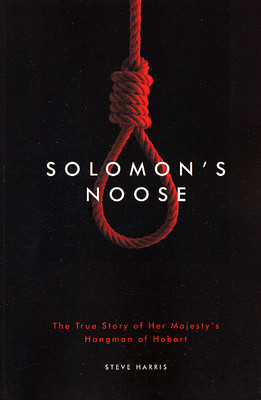 Solomon's Noose: The True Story of Her Majesty's Hangman of Hobart

The story of a young convict, Solomon Blay, who became Her Majesty's hangman in Van Diemen's Land; the man who personally had to deliver an Empire's judgment on 200 men and women, and endured his own noose of personal demons and demonisation in order to 'survive'; all in the context of the great struggles of good-evil, life-death, hope-despair, which drew the attention of Darwin, Twain, Trollope and Dickens as Van Diemans Land evolved from a Hades of Evil to sow the seeds of nationhood.

The book paints a vivid picture of the society and poverty from which Blay’s character was forged in England and the desperate, brutal nature of being a convict in Van Diemen’s Land. 'Solomon’s Noose' is an important book in exposing the dark ‘underbelly’ in the formation of modern Australia.

Contents:
Introduction
1. An Oxford Graduate
2. Voyage to Exile
3. Arrival at the End of the World
4. Destination Hobart Town
5. Terra Van Diemen
6. Chains and Irons
7. Becoming a Hangman
8. The First Hanging
9. Rope and Rum
10. Doing the Business
11. The Bell Tolls
12. Stains and Stigmas
13. Tying to Knot of Mary
14. Revolution in the Air
15. Dickens and the Last Spectacle
16. Evolution and Execution
17. Long and Short
18. The Last Woman
19. Sex on the Scaffold
20. Fleeing the Noose
21. Literary Imprints
22. Missing Cash
23. Rope Shadows
24. The Exclusive Club
25. The Final Execution
26. Letting go of the Rope
27. Death of a Hangman
Select Bibliography
Acknowledgements
The Author

'From the furthest corner of that foreign country, the past, comes the haunting story of the convict who became the British Empire's youngest executioner. Beware the shock of the true - Andrew Rule, award-winning journalise and author

'Impressive research and a story that challenges the imagination - except that it's true. A prisoner elects to become a hangman - to improve his lot in life. All this set against the Gothic world of Van Diemen's Land in the time of convicts, bushrangers and rough justice. - Les Carlyon, best selling author of Gallipoli and The Great War