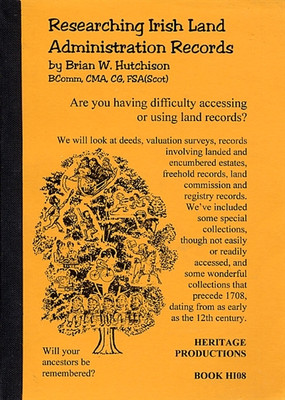 Land has been the most important element of most societies and the basis of all power and wealth. This certainly has been no different for Ireland and, up until most recently was the nemesis of the Irish people for few were able to own land of their own in this country. It's no secret that the vast majority of our Irish ancestors were simple tenant farmers who had to lease or rent land from the landowner, that was simply the reality of it.

However, the process of landholding was of vital significance to the Irish people, as it affected them dramtically in almost every aspect of their lives: economically, politically and socially. In short it determined such life events as whom they married, what they inherited, how well they lived and where they lived.

This book presents an overview of land tenure in Ireland with some additional brief history of land ownership. We look at the major sources of land records like deeds, valuation surveys, records involving landed and encumbered estates, freehold records, land commission and registry records. And the author has also included details of some special collections, though not easily or readily accessed, and some wonderful collections that precede 1708, dating from as early as the 12th century. For each record we learn the value of it, where to find these records and what they contain.