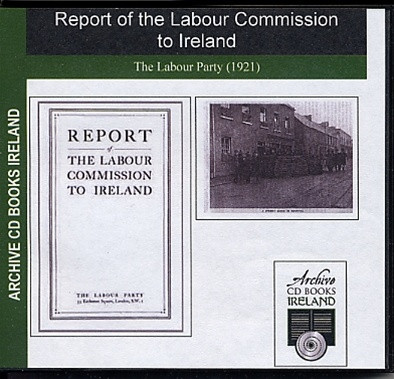 Report of the Labour Commission to Ireland

Published in 1921 by the English Parliamentary Labour Party, the Report of the Labour Commission to Ireland, although a relatively brief publication of just 124 pages, is a thoroughly fascinating, if sometimes a little biased, account of the War of Independence in Ireland, especially the conduct of the British Army and Auxiliary Forces.

The Labour Commission to Ireland was the result of a motion put before the House of Commons on 25th October 1920 by Arthur Henderson for the Labour Party, which stated:

"That this house regrets the present state of lawlessness in Ireland and the lack of discipline in the armed forces of the Crown, resulting in the death or injury of innocent citizens and the destruction of property; and is of opinion that an independent investigation should at once be instituted into the causes, nature, and extent of reprisals on the part of those whose duty is the maintenance of law and order."

The motion called for a vote to censure the British Government and the actions of its agents in Ireland and requested an independent inquiry. This was declined and as a result the Labour Party decided to set up its own Commission to investigate 'the whole question of reprisals and violence in Ireland'. The current publication is the result of the Commission's findings. Some of the most striking features of the Commissions Report is the level of detail provided by the witnesses interviewed by the Commissioners and the lengths to which the Commission went to detail accounts of violence which in some instances were only days old. A case in question is was the infamous Croke Park massacre where the Commission reconstructed the events of 21st November, while interviewing witnesses on the spot.

The bulk of the Commission's Report is taken-up by five lengthy Appendices, which form the basis of the findings of the Commission. These include the following: Police Documents, which are made up of actual police documents bearing witnesses statements; evidence obtained from witnesses by the Commission on the several special cases reported on, which include Croke Park and other significant incidents of violence; material supplied or obtained relating to the victimisation of Policemen's wives and Barrack Servants - an overlooked subject during the war where violence occurred on both sides - concluding with the Commission's Report to the Labour Party Conference held on 29th December 1920.

The Report is replete with dozens of photographs of material destruction, notably from north Co. Dublin and Co. Cork, which in and of themselves make this a fascinating account of the war. Republished here on fully searchable CD-ROM, the Report on the 1920 Labour Commission to Ireland is a valuable historical document detailing the violence that occurred immediately before Ireland's independence.