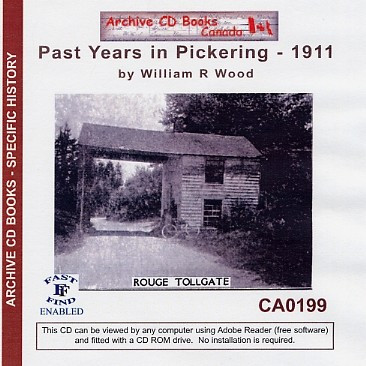 Past Years in Pickering

Published in 1911, this book was written by William R. Wood, the one time Presbyterian Minister of Claremont, Ontario. The Pickering we think of today is a city which exists within the urban sprawl of Greater Toronto, astride the main road between Kingston and Toronto. But this book is actually about the Township of Pickering, an administration district within Durham County, comprising several communities and rural districts, just one of which originated as the village of Pickering proper.

The Rev. William has provided us with, as he puts it, 'a series of sketches', taking for their subjects various aspects of life and development of the Township. These sketches are filled with references to inhabitants and families who played a role in the settling and development although for a more in-depth examination of the inhabitants we turn to his last chapter which occupies fully one third of the book and provides the biographies of hundreds of local people and, frequently, their families.

The numerous changes in boundaries and administrative responsibility in the area make it difficult to name all the various locations which have been influenced by Pickering Township over the years, but the following list is our attempt at the task, taken mainly from places mentioned in the book: Balsam, Brock, Brougham, Cherrywood, Claremont, Dunbarton, Duffins Creek, Eldon, Frenchmans Bay, Glensharred, Green River, Greenwood, Jackson, Kinsale, Liverpool, Mariposa, Mount Pleasant, Pickering, Rosebank, Rougemount, Rouge River, Salem, Whitevale. In addition there are frequent references in the book to the adjacent centers of Whitby, Markham, Mississauga, Scarborough, and Stouffville.