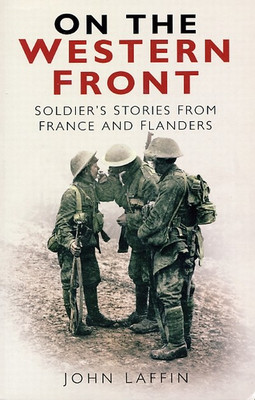 On the Western Front: Soldiers' Stories from France and Flanders

Official histories of the First World War are accounts of strategy and tactics, political and logistical considerations and after reading them many might ask why soldiers are rarely mentioned except in terms of military units. Even regimental histories devote more space to the plans and concepts than to the men
used to implement the plans.

But at its lowest level the history of the 'Great War' is made up on millions of trivial incidents, for something happened each day to each man - something that made him laugh, cry or sigh. This collection of stories reflect the 'real' war. Most were for consumption within the army so they were only heard by the
men in the trenches, behind the lines, at base hospitals and at the estaminets and billets during rest periods.

This book was the first serious attempt to illustrate the humanity of the soldier on the Western Front, revealing the conditions, attitudes and practices of 1914-18, revealing the soldiers war as they saw it from first shot to last.

Review:
'The great virtue of this book is its simplicity and authenticity ... This is a collection of stories about soldiers by a former soldier, and John Laffin has got it absolutely right.' - British Army Review