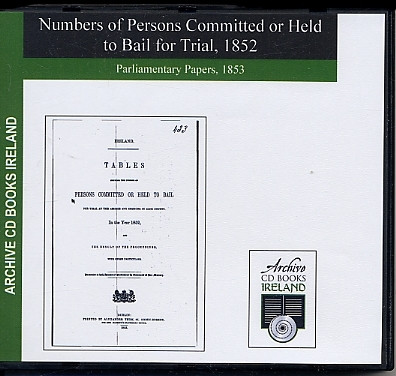 Numbers of Persons Committed or Held to Bail for Trial, 1852

This important 98-page report provides detailed analysis of those convicted and the crimes committed during 1852. The results are displayed in tabular form under a wide variety of headings. 17,678 persons were imprisoned as a result of trials heard at the Assize courts and Quarter Sessions courts. These are the majority of the most serious offences tried in the country. A further 80,000+ people were imprisoned as a result of hearings at local Petty Sessions courts and under police powers, but these are not dealt with.

The report commences with an overview and analysis, followed by a series of national tables of crimes, convictions, acquittals, sentences, etc. These are listed from Offences against the person (murder, manslaughter, infanticide, abortion, rape, assault, sodomy, bigamy, desertion, etc.), Offences against property (with or without violence, malicious, etc.), Offences against currency and forgery, and a variety of other types of offences. Against each type of offence is listed the number of offenders, types of convictions (from fines, imprisonment, transportation and execution), those found insane, discharges and acquittals, and sentences commuted. Those found guilty are then tabulated by gender, age and literacy.

This is followed by the same detail for each county.