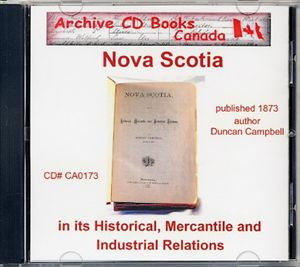 Nova Scotia in its Historical, Mercantile and Industrial Relations

An excellent and comprehensive history of Nova Scotia with a rather misleading title. In his preface the author explains that when preparing the manuscript for this book he was anticipating the publication of the results of the 1871 census. By the time he had the draft manuscript completed, however, only one of the five anticipated volumes of the census had been released so his final book lacked much of the numeric and statistical data he had anticipated gleaning from the census.

In some ways this may be regarded as fortunate since this book as published, and copied here, contains a far fuller account of Nova Scotia's history that it would if Duncan Campbell had had to edit it to make room for a lot of data which, after all, is still available to us in the said census report.

This CD copy is text searchable so that the information in this book is now more accessible than even the excellent 18 page index had made the original.