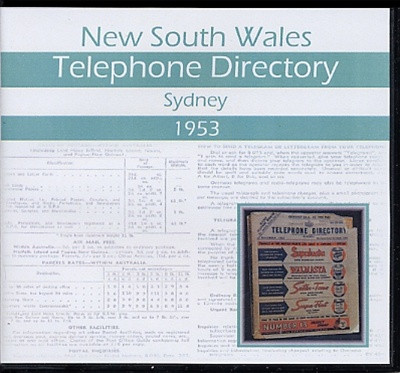 This New South Wales Telephone Directory includes the city of Sydney and metropolitan exchanges including: Woolloomooloo, Ashfield, Castle Hill, Hornsby, Avalon Beach, Manly, Parramatta, Liverpool, Sutherland and many more. Directions on how to make local and trunk calls including their costs are listed along with much general but relevant information.

Also included is an index to the Pink Pages and a Classified Telephone Directory which contains a list of all business and professional subscribers, classified under the headings of their 'respective callings'

HOW TO CALL FROM AN AUTOMATIC (DIAL) TELEPHONE.
- Be sure you know the right number.
- Remove the receiver.
- Listen for the " dialling " tone-a continuous low-pitched burr-which signifies that the line is clear and that dialling may be commenced. If the "dialling " tone is not audible, or the "engaged" tone -an interrupted high-pitched sound is heard, replace the receiver for a few seconds before trying again.

To a number prefixed by a capital letter or letters. - Place your finger in the opening in the dial over the first letter of the number which you are calling, and move the dial clockwise until you strike the finger stop.
- Remove your finger from the opening and allow the dial to return unaided to its normal position.
- Then dial the other letter (if any) and figures in the order shown in the number.
- When you hear a low-pitched burr-burr sound-the " ringing" tone - the called telephone is ringing.