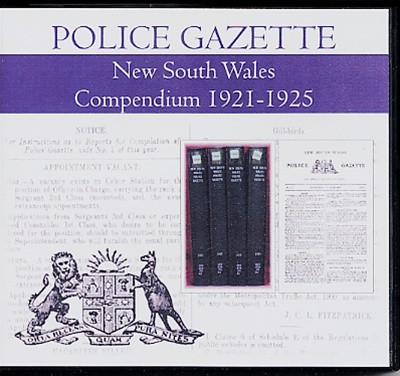 Police gazettes provided information and instructions to members of the police force. You can expect the New South Wales Police Gazettes to include the following information that will usually list names and sometimes personal details, descriptions with photograph. Addresses and/or occupations may be an added bonus for the researcher:
- apprehensions
- complainants
- deaths in public places
- escapees and absconders from custody
- lost or stolen property and stocknames of victims; sketches of jewellery and watches
- deserting wives, families, etc
- deserting from military service
- deserting from merchant vessels
- inquests
- missing friends
- persons suspected or wanted for a crime and warrants issued
- police promotion examination results and appointments
- prisoners discharged from gaols
- prisoners released on tickets of leave (under licence)
- prohibited immigrants

This compendium contains the five years of New South Wales Police Gazettes, from 1921 to 1925 on a singe CD.

This CD contains high quality scanned images of the whole of each year's worth of issues. They have been bookmarked for easy navigation, and pages can be searched, browsed, enlarged and printed out if required.