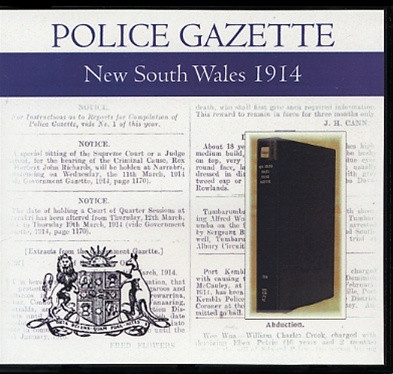 Usually issued weekly, this CD is a compilation of all 52 issues released throughout 1914. Each issue is usually 10-12 pages long, and contains information such as:
- apprehensions
- complainants
- deaths in public places
- escapees and absconders from custody
- lost or stolen property and stocknames of victims; sketches of jewellery and watches
- deserting wives, families, etc
- deserting from military service
- deserting from merchant vessels
- inquests
- missing friends
- persons suspected or wanted for a crime and warrants issued
- police promotion examination results and appointments
- prisoners discharged from gaols
- prisoners released on tickets of leave (under licence)
- prohibited immigrants
- and notices from Police Gazettes from other states are also often included if it was felt that they might 'head that way'

The Police Gazettes are an incredibly unique source of information, simply because they were designed to be distributed amongst the Police Force only, and the information contained often cannot be found anywhere else.

Promotions
Secretary's Department
His Excellency the Governor, with the advice of the Executive Council, has been pleased to approve of the promotion of Sergeants First Class John Carnegie Smith, William Henry Carson, and Reginald William Mills to the rank of Acting Sub-Inspector of Police, to take effect in each instance from the 1st August, 1914.
J.H. Cann

Murder - £200 Reward
Chief Secretary's Office,
Sydney, 12th August, 1914.
Whereas on the 21st February last, a man named Edward Dixon was found in the bush on the eastern side of Rose Bay, Sydney, with several wounds on his head, from the effects of which he died while being conveyed to the Sydney Hospital: And whereas a warrant has been issued by the Paddington Police Bench for the arrest of one David Rowlands, charged that he did, at Rose Bay, near Sydney, on the 21st day of February, 1914, feloniously and maliciously murder one Edward Dixon: And whereas at an inquest held on the 17th July, before the Acting City Coroner, the following verdict was returned: "I find that the said Edward Dixon, in William-street, Sydney, in the State of New South Wales, on the 21st day of February, 1914, died from fracture of the skull and injury to the brain, feloniously and maliciously inflicted on him on the same day in vacant ground off Bay View Hill road, Vaucluse, in the said State, by one David Rowlands; and I further find that in the manner aforesaid the said David Rowlands did feloniously and maliciously murder the said Edward Dixon." Notice is hereby given that a reward of Two Hundred Pounds (£200) will be paid by Government for such information as shall lead to the apprehension and conviction of the said David Rowlands. In addition to the above reward, His Excellency the Governor will be advised to extend a free pardon to any accomplice, not being the person who actually caused the death of the said Edward Dixon, who shall first give such required information. This reward to remain in force for three months only.
J.H. Cann

Not only is this an invaluable resource for anyone researching in New South Wales, but it makes for fascinating reading even if you don't have family there.