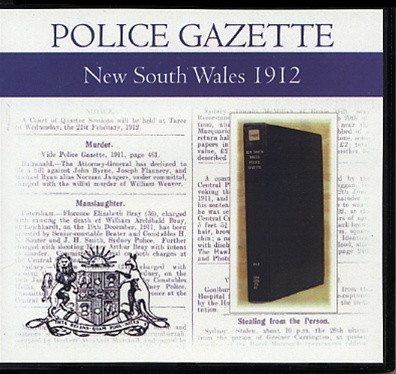 What information can be found in a New South Wales Police Gazette?
The information contained in the Police Gazettes does vary a little from year to year, but overall you will find details of any changes within the police force which are all listed (promotions, demotions, discharges, resignations, deaths), information is also given on housebreak-ins, robberies, arson, murders, arson, bigamy, rape, rewards, warrants issued, lists of arrests and discharges, lost horses and cattle, lost watches and jewellery, deserters from services and from families, escaped prisoners, missing friends, found items, and reports on those released. Notices from interstate police gazettes are usually included if it was felt that the person may be heading towards that state.

Far from being just a unique and extremely fascinating resource for local, family and social historians - they are useful for anyone with an interest in New South Wales in 1912. The CD contains all issues that were released during that year.

Manslaughter
Petersham.-Florence Elizabeth Bray (36), charged with causing the death of William Archibald Bray, at Leichhardt, on the 19th December, 1911, has been arrested by Senior-constable Beater and Constables H.N. Suter and J.H. Smith, Sydney Police. Further charged with shooting Henry Arthur Bray with intent to murder. Committed for trial on both charges at the Central Criminal Court.

Sydney.-William O'Reilly (24), charged with causing the death of Sen Gong, at Sydney, on the 19th January, 1912, has been arrested by Constables Hollis, McKnight, and McFarland, Sydney Police. Committed for trial by the Acting City Coroner at the Central Criminal Court. Bail allowed.