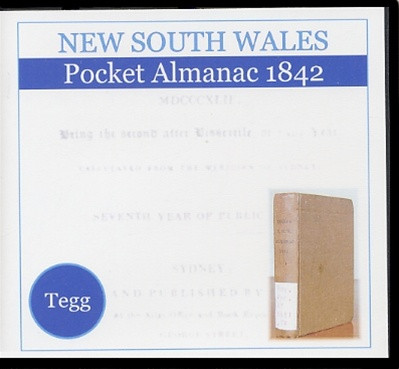 James Tegg (1808-1845) and his younger brother Samuel Augustus Tegg (1813), booksellers and publishers, were born in Cheapside, London, sons of Thomas Tegg, bookseller, and his wife Mary, née Holland. They arrived in Sydney in 1834. In January 1835 they opened as 'wholesale and retail book merchants' in George Street, Sydney.

One of Tegg's publications was the 'New South Wales Pocket Almanac', which appeared yearly from 1836 to 1844. This issue from 1842, contains 374 pages of useful information on immigration, government positions (and who held them), religious establishments, clubs and societies (and their members), as well as postal information such as despatch and arrival of mail from the various post offices, but also a listing of all of the postmasters/postmistresses in each of the postal towns in this state ...

A collection of other information such as a calendar for the year 1842, together with phases of the moon, gardening tips, the latitude and longitude of various places, the tide table for Sydney, bank holidays, law calendar, code of signals ... and so much more.