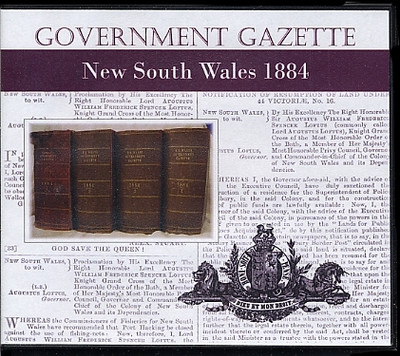 The Government Gazettes are a unique, useful and extremely fascinating resource for local, family and social historians and researchers in other fields throughout Australia. They were published by the government as a means of communication to officials and the general public and therefore contain information that is of great use in establishing an image of Australia and its people in the past.

NOTICE is hereby given that the partnership formerly carried on by the undersigned, Angus Robertson, Duncan Robertson, and David Sheriff Robertson, at and on the Stations or Runs called or known as Yarrabee, Goree, Bowna, Bingagong, and Colkamiminan, in the Murrumbidgee District of the Colony of New South Wales, under the firm of "Angus Robertson & Bros.," was dissolved by mutual consent on the eighth day of November, one thousand eight hundred and eighty-three.
Dated this twenty-first day of December, one thousand eight hundred and eighty-three.
ANGUS ROBERTSON.

This product contains high quality scanned images of the original gazette. It has been bookmarked for easy navigation. Pages can be searched, browsed, enlarged and printed out if required.