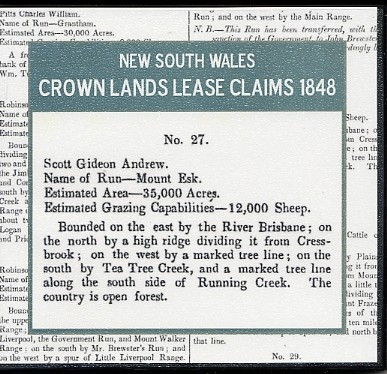 The New South Wales Government Gazette published lists of "persons [who] have demanded Leases of the several Runs of Crown Land, particularised in connexion with their respective names". These lists have been extracted from the Government Gazette and published here. They were published between May and October 1848. In addition there is a list of "Crown Lands Claims Approved within the Settled Districts"

No. 10.
Anderson Colin Alexander.
Name of Run--Newstead.
Estimated Area-71,680 Acres.
Estimated Grazing Capabilities-15,000 Sheep.
This station is watered by two small creeks, Newstead Creek and Swanbrook, both running into the M'Intyre River; and bounded on the north and north-east by a range dividing the waters falling into Swanbrook from King's Plains (Mr. Vivers) and Waterloo (Mrs. M'Intyre); on the south by the M'Intyre River ; on the west and north-west by a marked boundary line running nearly north, north-east and south southwest, dividing this run from Glenmore (Messrs. Brown and Alcorn) and Inverell (Mr. Campbell) ; east and south-east by a range of mountains dividing the waters falling into Newstead Creek from those of Paradise Creek (Mr. Dangar.)

Table of Crown Lands Claims Approved within the Settled Districts is also included and covers:

High quality scanned images of the whole of the originals. This CD has been bookmarked for easy navigation, and pages can be searched, browsed, enlarged and printed out if required.