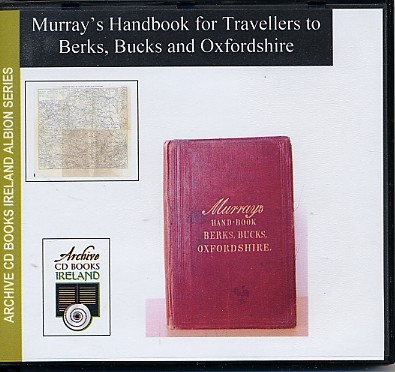 Murray's Handbook for Travellers to Berkshire, Buckinghamshire and Oxfordshire

First published in London in 1882 and republished here on fully-searchable CD-ROM is the third edition of John Murray's Handbook for Travellers to Berks, Bucks & Oxfordshire. Containing some 383 printed pages, the original title of the publication reads as follows: A Handbook for Travellers in Berks, Bucks, & Oxfordshire. Including a Particular Description of the University & City of Oxford, & the Descent of the Thames to Maidenhead & Windsor.

Travel writing as it is understood today can perhaps be traced to 1828 and Karl Baedeker's Rheinreise von Mainz bis Cöln. This was quickly followed by John Murray's Handbook for Travellers on the Continent and indeed Baedeker and Murray were to collaborate for the formers first publication in English in 1861. Murray's Handbooks for Travellers set the standard for English travellers for the rest of the nineteenth-century until Murray's was taken-over by the Muirhead brothers and their famous 'Blue Guides' in 1915.

John Murray (1809-1892) was educated at the prestigious English public school, Charterhouse from where he enrolled at Edinburgh University and following his studies he travelled extensively on the continent and this was the basis for his development of the first successful modern guidebooks, the Murray's Handbook for Travellers series. This series was begun in 1836 at a time when domestic and foreign travel was opening up, the guides came to cover all of Britain, the continent and further afield. Writers and contributors to these guides included known and unknown correspondents, including Thomas Cook correcting details about the Nile steamer, John Ruskin on Italian hotels and Felix Mendelssohn who recommended a hotel where he lived 'with a party of several ladies'. With their distinctive red covers and gold lettering Murray's handbooks became known and famous throughout the world. By the time the business was sold Murray's had help produce 400 titles and editions in the Handbook for Travellers Series and the company was also responsible for publishing works by David Livingstone and Charles Darwing, amongst many others.

This edition of Murray's Handbook for Berkshire, Buckinghamshire and Oxfordshire, details 28 routes throughout the three counties in question and includes detailed introductory notes on each. The routes begin at Windsor Castle and the Great Park at Windsor in Buckinghamshire - a detailed plan for which is included - and ends in Oxford. Each route is introduced by the overall distance to be travelled, the available modes of transport, typically by rail and provides extremely details topographical, geological and historical information for all of the places of note in between the start and destination. The original is fully-indexed and contains many hundreds of contemporary advertisements, mainly for hotels in the United Kingdom, Ireland and continental Europe.

Republished here in fully-searchable CD-ROM, is a chance to own own Murray's Handbook for Travellers to Berkshire, Buckinghamshire and Oxfordshire, one the publications that set the standard for independent travel literature throughout the English-speaking world.