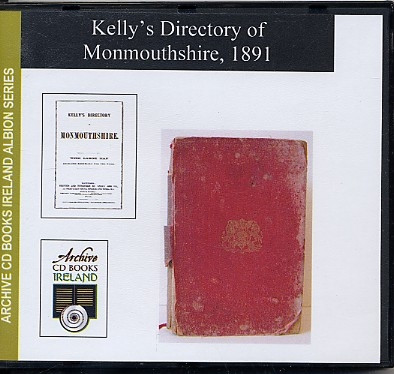 Republished here on fully-searchable CD-ROM is the 1891 edition of Kelly's Directory of Monmouthshire. Containing more than 300 printed pages this is an extended and improved edition from those previously published as indicated by the full title of this edition, which read as follows: Kelly's Directory of Monmouthshire and the Principal Towns and Places in South Wales, with the inclusion of numerous additional places and the streets of Cardiff and Swansea, which had hitherto not been included. This the publishers believed made the current edition the most complete directory for the areas covered the most complete and accurate to date.

Kelly's Directory for Monmouthshire details every village, town and city in the county providing thorough topographical and statistical descriptions of all of the religious, educational, civil and municipal institutions contained in each. In most instances the directory also provides a brief historical account of the village or town under consideration, which often includes important events and personages connected with the locality.

Beginning with the market town and parish of Abergavenny and ending with the parish of Wonastow, the bulk of Kelly's Directory for Monmouthshire for 1891 is taken-up by the alphabetical entries for the cities, towns and villages of the county. For any reader who might be unfamiliar with a directory and gazetteer such as Kelly's the degree of information contained on each village can be gleaned from the description of one of the entries, that of Penrhôs or Penrose. This was described as a parish situated three miles north from Raglan station on the Pontypool line of the Great Western Railway. Situate in the southern division of the county, in the hundred and petty sessional division of Raglan, the union and county court district of Monmouthshire and the eastern division of Abergavenny rural deanery Mounmouth archdeaconry and Llandaff Diocese. The Parish Church of St. Cadocus, repaired in 1848, is described as an ancient building with an embattled western tower, three bells and built in the Perpendicular Style. The Church seated 150 and the parochial registers dated from 1718. The living was a vicarage with and income of £200 a year and was the gift of the Dean and Chapter of Llandaff. Also present in the parish was a chapel for Primitive Methodists. An ancient camp could also be found in the parish, known as Penrose Castle, and in 1251 during the reign of Henry III, John de Monmouth was appointed keeper of the Castle. The castle was destroyed the following year by William de Cantalupe, Lord Abergavenny. The Marquess of Abergavenny was Lord of the Manor and according to the 1881 Census Returns the population of the parish was 302. The parish contained just under 2,600 and consisted mainly of a clay with a marl subsoil. The principal crops were wheat, barley, oats and turnips. The parochial school was built in 1866 for 60 children with an average daily attendance of 22. There follows an alphabetical list of the principal inhabitants of the parish, who were predominantly farmers.

While this is the typical level of detail the reader might expect to find for some of the smaller villages and parishes, the larger towns and cities in the county, for example Abergavenny and Tredgar, are afforded a much greater level of detail.

The alphabetical list of villages and towns is followed by a county-wide alphabetical listing of Monmouthshire's principal Private Residents, as well as a Trades and Professional Directory for the County and is concluded with more than 100 pages of county advertisements may of which are accompanied by sketches and pictures. For anyone with even the slightest interest in the residents, topographic descriptions and commercial interests present in Monmouthshire this fully-searchable 1891 edition of Kelly's Directory of Monmouthshire is highly recommended.