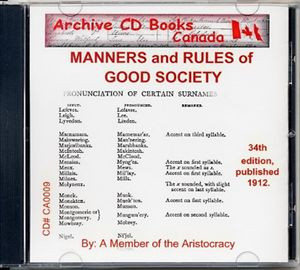 Manners and Rules of Good Society

'Manners maketh man,' to take a quote from William of Wykeham (1324-1404). It seems that the development of a civilisation can be measured by the complexity of it's social rules and customs. At the peak of the British Empire the 'Upper Classes' had developed a strict and complicated code of public behaviour which was expected to be fully understood and rigidly adhered to if one wanted to be a member of society.

Today we look back at the dichotomy between the lifestyle which this code of etiquette sprang from and that of the ordinary, or working, people with a surprise which borders on amazement.

A fascinating manual of 'polite behaviour' published in 1912 for those who considered themselves to be a part of 'society'. Interestingly the author shows an inadvertent hint at the prevalent double standards by his reluctance to have his 'good' name associated with a commercial venture, (ie. publishing this very book).

This is a single edition of a work which was frequently revised to '...keep it up to date, that it may be depended upon as being not only the most reliable, but also the newest book of etiquette'. This edition falls in the middle of a run of editions stretching from 1889 to 1943.

Topics covered include: Introductions, Leaving Cards, Paying Calls, Forms of Address (including to royalty), Behaviour at Parties, Weddings, and other Social Occasions. There are also instructions on the 'forms' to be used when abroad both in 'The Colonies' and in India.

A must read for anyone who wants to understand the highly stylized public interactions of the upper and middle classes in good society.