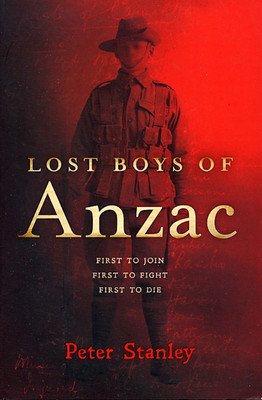 Australians remember the dead of 25 April 1915 on Anzac Day every year. But do we know the name of a single soldier who died that day? What do we really really know about the men supposedly most cherished in the national memory of war? Peter Stanley goes looking for the Lost Boys of Anzac: the men of the very first wave to land at dawn on 25 April 1915 and who died on that day. There were exactly 101 of them, and this book contains biographies of each of them.

They were they first to volunteer, the first to go into action, and the first of the 60,000 Australians killed in that conflict.

'Lost Boys of Anzac' traces who these men were, where they came from and why they came to volunteer for the AIF in 1914. It follows what happened to them in uniform and, using sources overlooked for nearly a century, uncovers where and how they died, on the ridges and gullies of Gallipoli. - where most of them remain to this day. An we see how the Lost Boys were remembered by those who knew and loved them, and how they have since faded from memory.

'Lost Boys of Anzac' offers a startlingly original account of the landing on Gallipoli, relvealing in poignant detail how one day of battle led to decades of grief: a powerful new way of looking at Australia's history of the Great War.

Contents:
Note on text
Map of Gallipoli
Prologue: The Lost Boys
Introduction
- The list of Lost Boys, 1914
Part 1. Lost Boys in 1914
- Australia in 1914
- 'He joined at once': volunteers for the AIF
- 'We hail from busy Rundle Street': callings
- 'A roamer': on the tramp
- 'The opportunity in Australia': migrants
- 'A born soldier': officers
- State school to 'Varsity men: education
Part 2. Lost Boys in uniform
- 'Well and truly serve': enlistment
- 'What a soldier ought to be': military experience
- 'Australian Expeditionary Force': in camp
- 'Full of incident': ther voyage to Egypt
- 'Healthy, keen, spirited and adventurous': Egypt
- 'No thought of the death that awaits': to Lemnos
- 'We may be cut up': oders for the landing
Part 3. Lost Boys on Gallipoli
- 'Not seen to land': in the water
- 'Rushed heightsabove shores': the advance inland
- 'Have we come too far?': the advanced parties
- 'The votal ground': the fight for Baby 700
- 'Under a very heavy fire': the fight for the ridges
- 'Jacko got his shrapnl into them': artillery fire
- 'Wounded out in front': the fate of the furthest parties
- 'Dig in for night': the day ends
Part 4. Lost Boys missing
- 'Lost afyer the landing': comrades mourn
- 'There is no report that he died': casualty lists
- 'Prompt and sympathetic attention': Base Records
- Sad intelligence soon spread': delivering the news
- Something is wrong': delays in informing families
- 'No trace': the missing
- 'What does "missing" mean?: the Red Cross's searchers
- 'Still on active service': ghosts of the Lost Boys
- 'He must be a prisoner': Lost Boys captured?
- 'Waiting most anxiously': families on tenderhooks
Part 5. Lost Boys dead
- 'Killed in action': the courts of enquiry
- 'Deceased soldiers' affaires': administrative consequences
- 'Money matters': pensions granted, and not
- 'His mother's only support': bereaved parents
- 'The belongings iof their boys': soldiers' effects
- 'Syuch a lot of letter-writing': complications
- 'Yes, a brother killed in action': bereaved families and the war
- 'Harry alive': hopes fade
Part 5. Lost Boys remembered
- 'Memory's golden chain': in memoriam
- 'A gap that will never be filled': return to Gallipoli
- 'The circumstances surrounding his death': the circulars
- 'To a grave so far away': burial
- 'One vast graveyard': the cemeteries
- Before the pilgrimages come': the Lost Boys' graves
- 'His death is shrouded in mystery': the lost
- 'Never recovered': the effects of war
Epilogue: The Lost Boys today
Acknowledgements
Appendix 1. The Lost Boys of Anzac
Appendix 2. Note on sources and methods
Select bibliography
Index