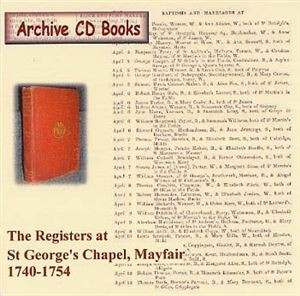 Transcripts of the registers found in the personal possession of Revd. Alexander Keith. The chapel was a place that performed marriage ceremonies without the need for obtaining a licence or calling of banns. These were called clandestine marriages and although irregular, they were perfectly valid and binding at the time.

The Rev. Keith was appointed to officiate there and he soon began to advertise in newspapers of the advantages of marrying in his chapel. The Rector of nearby St George, Hanover Square (a proper church), took great exception to this and commenced a suit against Keith in the Doctors Commons. As a result of this Keith was excommunicated in October 1742 and thrown into the Fleet Prison in 1743.

The clandestine marriages continued, however, performed by his assistants in a nearby private dwelling while Keith lay in prison, where he eventually died in 1758.

Amazingly, although one would expect that no respectable person would associate themselves with this place, there are marriages of some eminent people too. Such as that of the Duke of Hamilton to Miss Elizabeth Gunning 14th February (St Valentine's Day) 1752. Horace Walpole refers to this particular marriage thus;

"The event which has made most noise since my last is the extensive wedding of the youngest of the two Gunning sisters, ..... they were married with the ring of a bed-curtain, at half an hour after twelve at night, at Mayfair Chapel."

Marriages at the chapel were stopped by the passing of Lord Hardwicke's Marriage Act which came into force on 25 March 1754, but referring to the registers you will see that no less than 61 couples were married there on the previous day! Indeed, in this 328 page book, no less than 316 pages contain marriages.