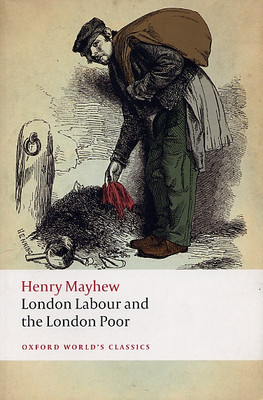 London Labour and the London Poor

'London Labour and the London Poor' originated in a series of newspaper articles written by the great journalist Henry Mayhew between 1849 and 1850. A dozen years later, it had grown into the fullest picture we have of labourers in the greatest city of the nineteenth century.

It is an account of the hopes, customs, grievances and habits of the working-classes that allows them to tell their own stories.

Combining practicality with compassion, Mayhew worked unencumbered by political theory, focusing on the lives of the London poor, their occupations and trades. This selection shows how well he succeeded. From costermongers to ex-convicts, from chimney-sweeps to vagrants, the underprivileged of London are uniquely brought to life - their plight expressed through through a startling blend of first-person accounts, Mayhew's perceptions and sharp statistics.

This new selection offers a cross-section of the original volumes and their evocative illustrations, and includes an illuminative introduction to Henry Mayhew and the genesis and influence of his work.

Contents:
List of Illustrations
Introduction
Notes on the Text and Illustration
Select Bibliography
A Chronology of Henry Mayhew
London Labour and the London poor
Preface

Volume 4: Those That Will Not Work
- Introduction and Classification
- Prostitution in London
- Thieves and Swindlers
- Beggars and Cheats
Appendix 1. Money and the Cost of Living
Appendix 2. Map of London c.1848
Appendix 3. 'A Table Showing the Qusntity of Reguse Bought, Collected or Found in thje Streets of London'
Appendix 4: 'A Visit to the Cholera Districts of Bermondsey'
Explanatory Notes