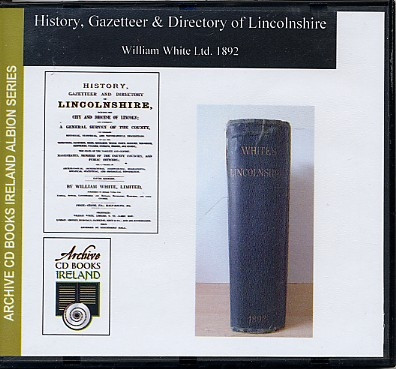 First published in Sheffield in 1892 and republished here on fully-searchable CD-ROM is William White's History, Gazetteer and Directory of Lincolnshire. Containing more than 1,250 printed pages the full title of this publication provides a good indication to the scope of the work: History, Gazetteer and Directory of Lincolnshire, Including the City and Diocese of Lincoln; and comprising A General Survey of the County, and Separate, Historical Statistical Descriptions of all the Wapentakes, Hundreds, Sokes, Boroughs, Towns, Ports, Parishes, Townships, Chapelries, Villages, Hamlets, Manors & Unions; The Seats of the Nobility and Gentry; Magistrates, Members of the County Councils and Public Officers; And a Variety of Archaeological, Architectural, Agricultural, Biographical, Botanical, Statistical and Geological Information.

Beginning with a number of indices to the volume, the names of magistrates sheriffs, seats of the nobility, fairs, the History, Gazetteer & Directory of Lincolnshire, then provides a General History and Description of the County of Lincoln. This includes an especially good section on the botany of the county written by F. Arnold Lees and the geology by W. Jerome Harrison. The former identifies all of the species of plant, flower, moss, etc., in the county with their dates and first identifiers; there follows an essay on the Lincolnshire Fens.

The majority of the History, Gazetteer and Directory of Lincolnshire is taken-up by the Towns, Parishes and Villages section of the publication. Containing some 900 pages this alphabetically details all of the towns, parishes and villages in the county, beginning with Aby-with-Greenfield and ending with Yardborough, the description contain for one of these entries, that of Lee, provides a clear idea as to the extent of information that can be expected on some of the smaller hamlets and villages in Lincolnshire.

LEE - Lee is described as an ancient village replete with many thatched and ivy-clad dwellings shaded with trees. In 1891 it contained 188 inhabitants and occupied 2,149 acres of land, which included Lea Wood and Lea Marsh. The majority of the village is situated on the east of the Trent except two small parts called Burton Ferries and Boles, which are situated on the Nottinghamshire side. The local Church, dedicated to St. Helen, is of Early English architecture and consists of a nave, chancel, north aisle, a tower and clock with quarter chimes and a peal of six bells. The church contains seven stained glass windows, the oldest of which bears the arms of Trehamton and the interior consists of good open benches made of oak and contains a vault and several marble tombs. A mile to the east of the village at Hermit Dams is the former site of an old crenellated manor house and the remains of fish ponds. Since the reign of Elizabeth the Manor of Lea has been in the possession of the Anderson family. Lean Manor is an ancient building with sylvan pleasure grounds. There follows a list of the Lea nobility, gentry, merchants, traders and farmers.

While this is the minimum level of detail that can be expected, larger towns and cities, such as Lincoln and Grantham are afforded much more detail. The entry for the City of Lincoln, for example, is detailed in more than 100 pages and includes and alphabetical and trades directories.

The History, Gazetteer and Directory of Lincolnshire is concluded with the classified Professions and Trades Directory for the county covering more than 200 pages and detailing the trades and professions of thousands of businesses. For anyone interested in the history or occupants of Lincolnshire this is a must.