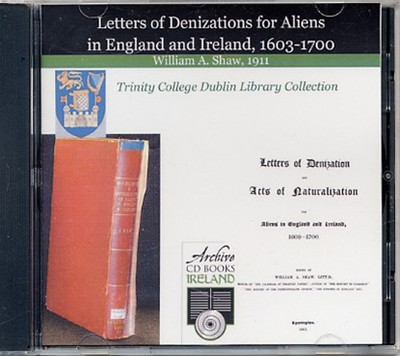 Letters of Denizations for Aliens in England and Ireland 1603-1700

This republication of Letters of Denization and Acts of Naturalization for Aliens in England and Ireland, 1603-1700, was edited by William A. Shaw and published by the Huguenot Society of London in 1911.

The first instance of legislatively making a foreigner into an English subject was recorded in 1295, when Elias Daubeny was granted by the grace of King Edward I, the right to be held as an Englishman.

Documentary sources for denization are drawn from the Patent Rolls and a number of subsidiary sources including the Signet Office Docquet Book and the Privy Seals as well as the Patent Rolls of Ireland. The Letters of Denization & Acts of Naturalization covers the periods from the accession of James I until the end of the reign of William III and is especially interesting during the period of the so-called 'Great Migration', when England and Ireland became the refuge for Protestants fleeing religious persecution. During this period grants of denization were made without fee on 'humanitarian' grounds and included large numbers of Huguenot refugees in England and Ireland. Numbered amongst the denizens were foreign soldiers and officers in the employ of William of Orange before and after he acceded to the throne.

In the main, the records for naturalization are more fulsome than those for denization, requiring as they did a bill of Parliament. The records of Irish Denizations and Naturalizations date from the third year of the reign of James I are draw almost exclusively from the Irish Patent Rolls. In total the Letters of Denization & Acts of Naturalization is republished in 457 pages over 100 of which treat on Irish denizations naturalization and is fully indexed and fully searchable on this CD-ROM publication.