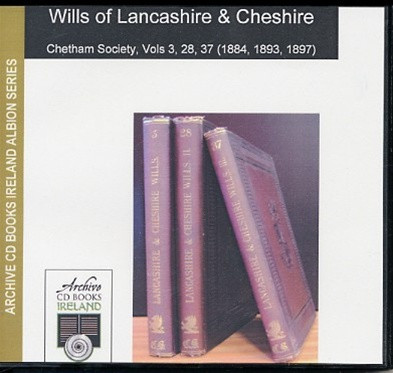 Lancashire and Cheshire Wills and Inventories from the Ecclesiastical Court, Chester Vol. 3, 28 and 37

The second volume (Volume 28 new series) was originally published in 1894 includes transcripts of wills and inventories proved at Chester between 1572 and 1696, as well as 108 Lancashire and Cheshire wills proved at either Richmond or York between 1542 and 1650.

The third volume (Volume 37 new series) is a continuation of the series and contains the fulsome abstracts with genealogical notes of some 60 wills and their inventories, mainly from individuals from the more elevated ranks of society, although the volume includes the wills of yeomen, schoolmasters and clergymen from the middle ranks of society. It is an essential resource for the study of society and family history in these two counties in the 16th and 17th centuries.