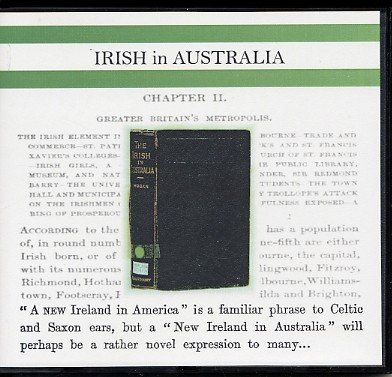 James Hogan was born in Ireland in 1855, and emigrated with his parents to Australia in 1856. He spent his his early life growing up in Victoria and became a teacher, journalist, author and politician.

Hogan contributed articles to many journals and became recognised internationally as an authority on Australian affairs. In 1887 he set about writing the book Irish in Australia which contains 360 pages of information relating to those who emigrated and the influence that they had on this young colony.

The chapters start with a survey of the South, and move on to "Greater Britain's Metropolis" (Melbourne). The story of Burke and Wills is mentioned, as is the goldrush in Ballarat and quartz mining in Sandhurst. Irish Centres such as Geelong and Gippsland are discussed along with the 'Erin-go-Bragh' voyage from Ireland to Queensland. It then ranges over the other Australian colonies, and
many notable Irish in Australia.

A useful guide for not only those with an interest in Irish history, but also those whose ancestry traces back to Ireland.