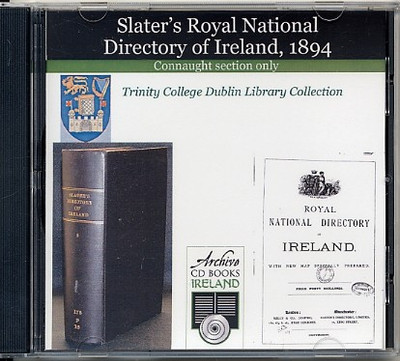 This publication reproduces just the Province of Connaught section of Slater's 1894 Royal National Directory of Ireland. This directory is one of only nine national directories for Ireland published prior to 1900.

Apart from the fulsome coverage given-over to Ireland's four major cities, Slater's also provides information on the principal private and commercial residents (including farmers) of the larger towns and villages.

As a fully searchable CD-ROM, the publication of Slater's Royal National Directory of Ireland is an essential research aid that must grace the shelves of anybody interested in the people and institutions of Ireland.