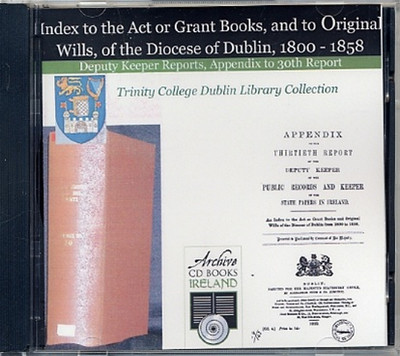 The Deputy Keeper's reports of the Irish Public Records Office (PRO), published annually between 1869 and 1920 (and less frequently thereafter), detail the work undertaken by the Office during the preceding twelve months. Among the more useful of these reports are the volumes that contain indexes to Grant Books of the Dublin diocesan court. Previous to 1858, responsibility for such issues as succession and matrimony lay with the ecclesiastical authorities, and wills and marriage requests had to be registered with the various dioceses. During the nineteenth century many of these indexes were published, including the Dublin index, which appeared in two volumes of the Deputy Keeper's reports. Running to more than 1,100 pages, this second publication covers the period from 1800 until 1858, when responsibility for these concerns was transferred to the new Probate Court.

Electronic versions of these records are now being made available for the first time. Researchers focussing on Dublin or its surrounds will find this fully searchable source an invaluable aid in their explorations.