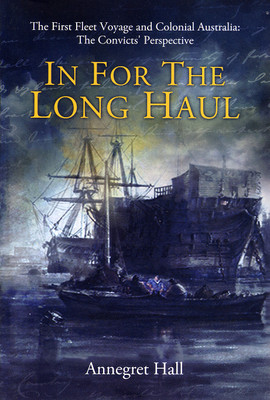 In For the Long Haul: The First Fleet Voyage and Colonial Australia, the Convicts' Perspective

Many stories of the First Fleet and New South Wales colony are prejudicial to the conduct of convicts and especially females. This book relates the history of this period through the eyes of the convicts, and in doing so debunks many untruths about the young men and women who struggled to create a new life in an unknown land. The lives of two convicts, Anthony Rope and Elizabeth Pulley from rural Norfolk, provide a factual human thread stitching together the fascinating story of this great Australian venture. Their individual stories, which start with stealing to stay alive, parallels those of most 752 convicts aboard the motley fleet of eleven ships sent in 1787 to establish a prison settlement in a faraway continent.

Anthony and Elizabeth's early existences were miserable and tragic, involving numerous criminal charges, persecution by guards, one of the 'Fighting Five' aboard the 'Friendship'; a liaison at the 'riotous' disembarkation, a hanging charge for their wedding supper, and opposition to the Rum Rebellion in support of William Bligh. This is an epic account of adversity, hardship and courage. Anthony and Elizabeth's life together spanned 50 years – the entire period of convict transportation to Australia encompassing nine different Governors.

Far from being the scourge on society, ex-convicts were pioneering settlers who provided the economic resolve and backbone to a starving Australian colony when it was teetering on abandonment.