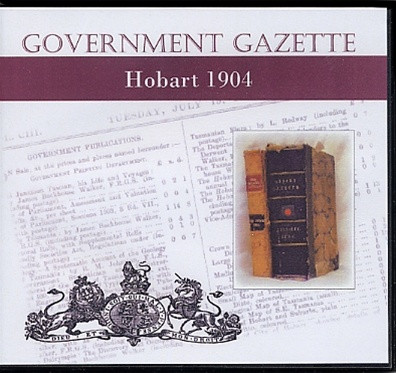 Government Gazettes are a unique, useful and extremely fascinating resource for local, family and social historians and researchers in other fields throughout Australia. They are published by governments and their agencies as a means of communication to officials and to the general public. Gazettes therefore contain a range of valuable and interesting content such as the following list of information:

Trade Marks Notices
No. 2962
General Register Office, Hobart, 19th April, 1904
Under the provisions of "The Patents, Designs, and Trade Marks Act, 1893", application has been made to register the following Trade Mark by Howard Button, Patent Agent, Launceston, in respect of Cocoa, Chocolate and Confectionery (Class 42), in the name of Adolph Leibner, of Fink's Buildings, 6A, Elizabeth-street, Melbourne, in the State of Victoria, Commonwealth of Australia, Importer.
The essential particulars of the Mark consist of the letters H C C enclosed in a circle, the first-names letter standing above and between the other two.
A facsimile of the Mark may be see at this Office.
R.M. Johnston, Registrar of Patents.

In the Bankruptcy Court, Launceston
In the matter of proceedings for liquidation by arrangement of composition with creditors instituted by Henry Fannon, of West Devonport, in Tasmania, Contractor and Carpenter.
Alexander Thomson Cruickshank, of Launceston, in Tasmania, Accountant, has been appointed Trustee under this liquidation by arrangement.
All person's having in their possession any of the effects of the said Henry Fannon must deliver them to the Trustee, and debts due to the said Henry Fannon must be paid to the Trustee.
Creditors who have not yet proved their debts must forward their proofs of debt to the Trustee.
Dated this sixteenth day of April, 1904.
Will. Hunt, Registrar.
J.H. Henry, Solicitor, Devonport.
227 - 8s. 6.

The Government Gazettes are an essential resource when researching Tasmanian history.