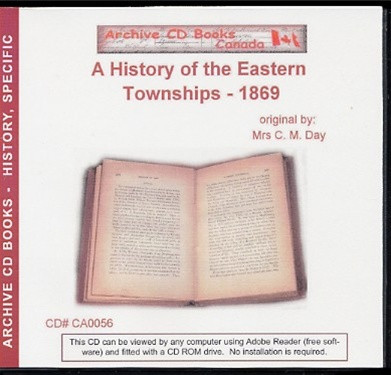 History of the Eastern Townships, 1869

An early history of Canada and more specifically of that important area of Quebec just to the South East of Montreal known as the Eastern Townships.

Mrs Catherine Matilda Day (1815-1899) wrote two books about the Eastern Townships, and they were very popular in their time. And rightly so: Catherine has an easy writing style which is surprisingly readable considering that she's writing a history. But that's her secret. She turns history into a series of tales giving a living presence to the historically accurate characters who are the subjects of her stories. See if you can read the story of the poor immigrant family who tried to walk through the Townships before the spring thaw, without reaching for the tissue box. Of course there are passages giving a more conventional, factual, history but even here Catherine gets right to the heart of the matter so you get the facts you need without any unnecessary commentary. In the third part of the book there is a detailed account of the formation of the Eastern Townships. The founding of each village is described and the names of many of the individuals and families instrumental in their early development are given in full.

The book is divided into three parts and its contents, as described by the author, are:
"Part First of the book contains a brief sketch of the discovery of America; the colonization of Canada by the French; its state up to the conquest; a short account of that event, and a reference to important changes that have transpired from time to time. Also, a synopsis of the civil history of Canada ..."

"Part Second contains a series of miscellaneous chapters, ... They relate principally to the aborigines of our own section; the earliest explorations and general opening up of the country for settlement; the conditions on which the lands were granted; the method of erecting townships; and finally, the difficulties, perils, and privations encountered by the early settlers."

"Part Third gives short historical sketches of each Township within the districts of Bedford and St Francis, with brief notes on many individuals who have been prominently interested in their early settlement. Such incidents and adventures as are proper to embody in a work of this nature are also given."

SAMPLES (from the chapter contents from Part two):