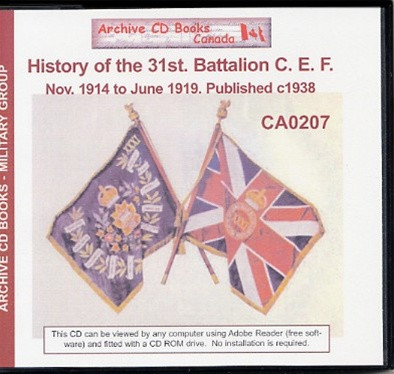 This is a faithful reproduction of the original book. The author or, as he styles himself, the Compiler and Assembler, Maj. H.C. Singer, ably assisted by Mr A.A. Peebles, has left us a document which will at once satisfy both the military strategist and those looking to understand the personal experiences of this group of fighting Canadians.

This is the story of the the 31st Battalion, otherwise known as the Alberta Regiment, which was raised in November 1914 as a component of the 6th Canadian Infantry Brigade, one third of the 2nd Canadian Division of the Canadian Expeditionary Force (CEF).

Starting from the assignment of Lieut.-Col. A.H. Bell as the commanding officer the narrative follows the recruitment in the main centers of Calgary and Edmonton as well as in many smaller towns across southern Alberta, the training both in Canada and in England and finally sees the Brigade landing in France and taking its place at the front. The list of battles in which the Battalion took an active part reads like a litany of the most famous and horrific of this Great War. Names like Flanders, Ypres and the Salient, the Somme, Vimy Ridge, Passchendaele, Amiens and Arras, still raise pictures of the horror of this war some 90 years after it took place.

Through the almost 450 pages of the narrative of this book Maj. Singer manages to give us a remarkable picture of both the strategic progress and a highly personal account of what it was like to be a soldier struggling to stay alive. in addition to the narrative there are numerous contemporary photographs showing the condition of the battlefield as well as in some of the trenches. To enable the reader to better follow the progress of the battles from the narrative there are also 8 detailed maps showing the topography and troop dispositions.

The book is completed with 68 pages of appendices containing lists of the Battalion's statistics, probably the most important of these being a nominal roll of the entire Battalion giving service numbers, names, casualty status and honors.