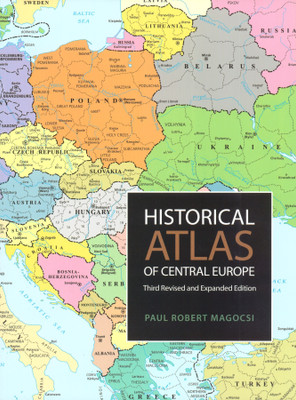 Central Europe remains a region of ongoing change and continuing significance in the contemporary world. This third, fully revised edition of the 'Historical Atlas of Central Europe' takes into consideration recent changes in the region. The 120 full-colour maps, each accompanied by an explanatory text, provide a concise visual survey of political, economic, demographic, cultural, and religious developments from the fall of the Roman Empire in the early fifth century to the present.

Nineteen countries are the subject of this atlas. In terms of today's borders, those countries include Lithuania, Poland, and Belarus in the north; the Czech Republic, Austria, Slovenia, Croatia, Hungary, and Slovakia in the Danubian Basin; and Serbia, Bosnia-Herzegovina, Montenegro, Romania, Moldova, Bulgaria, Macedonia, Albania, and Greece in the Balkans. Much attention is also given to areas immediately adjacent to the central European core: historic Prussia, Venetia, western Anatolia, and Ukraine west of the Dnieper River.

Embedded in the text are 48 updated administrative and statistical tables. The value of the 'Historical Atlas of Central Europe' as an authoritative reference tool is further enhanced by an extensive bibliography and a gazetteer of place names – in up to 29 language variants – that appear on the maps and in the text.

The 'Historical Atlas of Central Europe' is an invaluable resource for scholars, students, journalists, historians and general readers who wish to have a fuller understanding of this critical area, with its many peoples, languages, and continued political upheaval.