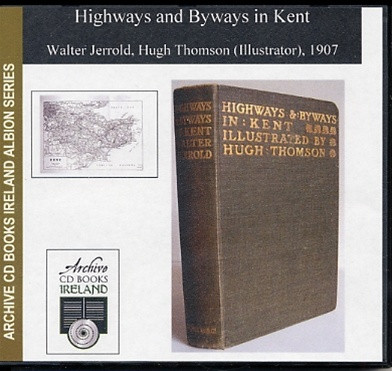 Highways and Byways in Kent

Originally published in London 1907 byMacMillan & Co., Ltd., this first edition of the Highways and Byways in Kent, is republished here on fully-searchable CD-ROM. Macmillan began publishing the Highways and Byways series in 1899 and by 1909 had completed almost twenty publications in the series, which extended across the length and breadth of England, Scotland and Wales, with one publication on Normandy and and another on Ireland. This highly popular series continued until the beginning of the Second World War.

The original publication of the Highways and Byways in Kent contains more than 440 printed pages, including a map of Kent, but alas not the route of the author, Walter Jerrold, who chose to take many short trips from a central point, and almost 150 pen and ink illustrations by Hugh Thomson, providing as with all of the Highways and Byways series a wonderful mix of topography, local history and folklore, which perhaps more than ever allows the reader to rediscover parts of Britain that have long disappeared under a morass of concrete.

Walter Jerrold undertook 21 'tours' on which he reported in the Highways and Byways in Kent and these included the following: Canterbury, its Cathedral, city and surrounds; the Isle of Thanet; Sandwich, Deal and the Goodwins; Dover and its neighbourhood; Folkstone and Hythe; Romney Marsh; around Ashford; Cranbrooke and the 'Hursts'; Maidstone and its neighbourhood; Tonbridge and 'the Wells'; Penshurst; Westerham and Sevonaks; Otford and 'the Hams'; Dartford and Gravesend; Cobham, Rochester and the Thames Marshes; Sittingbourne, Faversham and Sheppey and finally Kent near London.

Much of the charm a vigour of the Highways and Byways series which has stood the test of time is down to the travellers and in the case of Kent this is no exception.