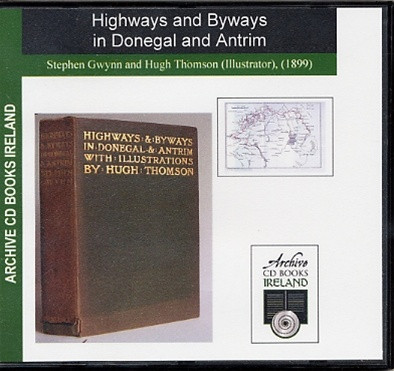 Highways and Byways in Donegal and Antrim

Originally published in London 1899 by MacMillan & Co. Ltd., this first edition of the Highways and Byways in Donegal and Antrim, is republished here on fully-searchable CD-ROM. Macmillan began publishing the Highways and Byways series in 1899, this being one of the earliest in the series, and by 1909 had completed nineteen publications in the series, which extended across the length and breadth of England, Scotland and Wales, with one publication on France (on Normandy) and this the only one in the series on Ireland. This highly popular series continued until the beginning of the Second World War.

This original publication contains more than three-hundred printed pages and a colour map of the route taken by its author, Stephen Gwynn and illustrator, Hugh Thomson. The Donegal Tourist Agency stated of the Highways and Byways in Donegal and Antrim that that it was a wonderful mix of topography, local history and folklore and Gwynn's late nineteenth century tour, most of which he undertook on foot or by bicycle, allows a modern readership to rediscover Donegal and Antrim through this travelogue. Containing twenty chapters detailing a dozen or more tours, Gwynn begins his tour with advice to the reader on both the Ulster dialect and to the cyclist, both of which could prove tricky, before commencing at Enniskillen and Lough Erne and taking a roughly circular route along the coasts of Donegal and Antrim before finishing his journey in Belfast.