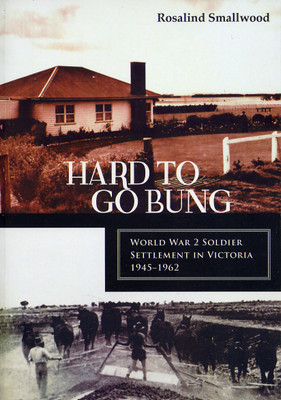 Many of the servicemen returning to Australia after World War 2 dreamed of making an independent living for their families on their own small farms. But in Victoria there were painful memories of the difficulties and heartbreak of soldier settlement after World War 1, when many families were unable to meet their debts and had to walk off their farms.

The story of Australia's most successful scheme for settling returned soldiers on their own farms. 'Hard to go Bung' includes the recollections of many of the 6000 families who gained a livelihood on farms across the state.

Review:
Rosalind Smallwood's book records this successful partnership of settler and government. It is a story of recognition by society of a duty to help those who served in the War. Equally it is a story of the continuing growth of our State and the struggle to make productive a harsh country. - John Cain Jr, Premier of Victoria, 1982-1990