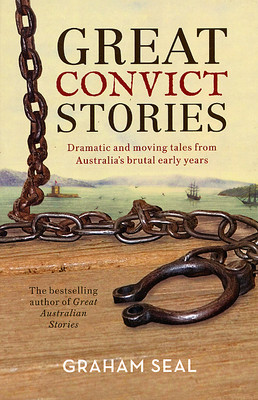 Graham Seal brings to life the brutal Australian convict transportation system with stories of notorious criminals, colourful characters, and harsh punishments. There were also happy endings for the men and women for whom transportation was an opportunity to start afresh in a new land.

He takes us back to Australia's ignominious beginnings, when a hungry child could be transported to the other side of the globe for the theft of a handkerchief.

It was a time when men were flogged till they bled for a minor misdemeanour, or forced to walk the treadmill for hours. Teams in iron chains carved roads through sandstone cliffs with hand picks, and men could select wives from a line up at the Female Factory. From the notorious prison regimes at Norfolk Island, Port Arthur and Macquarie Harbour came chilling accounts of cruelty, murder and even cannibalism.

Despite the often harsh conditions, many convicts served their prison terms and built successful lives for themselves and their families. With a cast of colourful characters from around the country such as the real Artful Dodger, intrepid bushrangers like Martin Cash and Moondyne Joe, and the legendary nurse Margaret Catchpole, 'Great Convict Stories' offers a fascinating insight into life in Australia's first decades.

Contents:
Prologue: Lashland
Introduction
1. Unpromising Beginnings
- Trouble on the Way
- The Hungry Land
- The Orgy That Wasn't
- Encountering Others
- Laying Down the Law
- A Practical Problem
- The Lure of Gold
- This Solitary Waste of the Creation
- Free by Servitude
- A Meek and Tender Wife
- The Last First Fleeters
2. Perilous Voyages
- A Sight Truly Shocking
- Irish Rebels
- The Fever Ships
- Attacked by America
- The Might-Have-Been Mutiny
- A Melancholy Mystery
- Skeleton Island
3. The Convict Underworld
- Wife for Sale
- Convict Magic
- Mrs Gravy's Husbands
- Special Treatment
- Stitches in Time
- No Common Criminal
- The Flash
- Skin Deep
- The Jury Guilty Founty Her
4. The System
- The Hulks
- The Dogline
- Canaries and Magpies
- Obtaining a Wife
- The Convict's Lament
- The Ironed Gang
- The Innocence of Thomas Drewery
- 'The Most Absurd, Prodigal and Impracticable Vision'
5. Pain and Suffering
- Hanged Three Times
- The Lash
- The Treadmill
- The Iron Collar
- Whipping Boy
- One Hundred Lashes
- To Plough Van Diemen's Land
6. Troublemakers
- Botany Bay Hero
- Thrown Unpitied and Friendless Upon the World
- The Beast of Goat Island
- Nymphs of the Pave
- Flash Mob at the Cascades
- The Patriots
- The Old Lag's Hero
- The Ghost Poet
7. Places of Condemnation
- Pluto's Land
- The Rats' Nest
- Coal River
- The Norfolk Island Suffering of Thomas Cook
- On the Square, Ever
- The Water Rats
- A Running Fire of Curtseys
- A Convict's Dream
- Not a Bad Man at Heart
8. Desperate Escapes
- A Heroic Struggle for Liberty
- The Vagabond of the Woods
- Charlotte the Pirate
- A Taste for Flesh
- From Hell's Gate to Chile
- The Great Escaper
- Rebel Heroes
9. The Felonry
- The Man Who Invented Australia's Beer
- Thw Real Artful Dodger
- The Botany Bay Rothschild
- The Legend of Margaret Catchpole
- The Convict King
- The Solicitor's Tale
- A Convict Maid
- A Broken Down Gent
- The Poacher's Fate
10. A Convict Stain
- Tom Tilley's Token
- The First Australia Day
- Floating Brothels
- The Stain That Would Not Fade
- The Cabbage Tree Mob
- Bottoms Up!
- The Gundagai Cat
- Shades of the System
- Last of the Expirees
Appendix: Convict Locations
Glossary
Notes and Sources
Further Reading
Acknowledgements
Photo Credits

Review:
'Graham Seal has the knack of the storyteller' - Warren Fahey AM