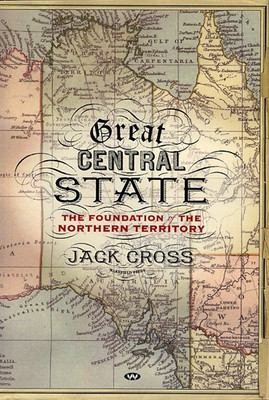 Great Central State: The Foundation of the Northern Territory

The Northern Territory's first European decades were an extraordinary mixture of grand vision and human folly, peopled with larger-than-life characters.

In 'Great Central State', Jack Cross tells the story of South Australia's ambitious - or foolhardy - plan to become the premier colony of Australia using its own unique experience in planned colonisation, and its bid to develop the north coast as an integral part of South-East Asia. Bitter feuding abounds alongside admirable efficiency, while tales of courage and sacrifice are matched by episodes of sad ignorance and abuse. This is a history strange but true.

Great Central State is a result of the most sustained historical research on a South Australian subject since Douglas Pike's Paradise of Dissent published in 1957. In his wry, meticulously researched book, Jack Cross demonstrates that already before 1911 when the Northern Territory was ceded to the Commonwealth, it had a sophisticated history of its own. He looks forward to the day when it will become the seventh Australian state.

REVIEW:
'From its murky beginnings during the 1860s, the Northern Territory became the exotic locus of South Australia's best utopian dreams and worst administrative nightmares. Jack Cross has trawled through the record of this extraordinary colonial venture, sorting folly from foresight and identifying pioneers and villains, opportunists and adventurers. He has given us a frank, unrestrained history of Australia's own frontier colony.' - Philip Jones

- The Dream of the Great Asian Market

- Plan in Detail - in Parliament

2. Caesar and his Fortune

3. The Intervention of the Partners

- The Indues Governor in Decline

- Crisis in Law and Order
- Law and Aborigines

- The Discovery of Lochac

- 'The Laissez-Faire' - Let the Market Decide

- Dutch Response - and the Misadventures of Captain Cadell

7. Coming of the Gauchos

- Ralph Milner and the Southern Route

- Dillon Cox and the Queensland Side