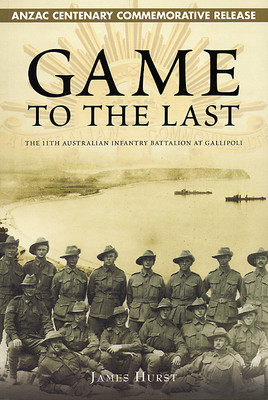 Game to the Last: The 11th Australian Infantry Battalion at Gallipoli

'Game to the Last' reveals the early battles and experiences of what would become 'one of the finest battalions which served in the war', the West Australian 11th Infantry Battalion, AIF, during the gruelling Gallipoli campaign of 1915. It follows the battalion members as they leave their homes and lives in Western Australia, experience the excitement and boredom of exotic Egypt, and undergo their baptism of fire in the first wave of the Australian and New Zealand landings at Gallipoli on 25 April 1915.

The Landing proved to be only the beginning of a campaign that would last for eight months; its survivors would fight five more major actions and sicken and weaken under the conditions of trench fighting on the peninsula. By the end of the campaign, only one in twenty of those who had landed in April has seen unbroken service with the unit and was still with it.

'Game to the Last' cast its net wide to uncover many previously unpublished personal accounts and photographs to tell these men's stories, many for the first time, and is the culmination of many years' meticulous research. The narrative was created afresh from primary sources, most of which have not previously been published. It uniquely ties the Gallipoli experience to the homes and families from whence these men came, and to which many did not return. This book also makes a significant historical contribution by reconstructing battles and experiences neglected by history for many decades.

In April 1915 these was no 'Anzac Legend'. Such arose from the achievements and behaviour in adversity of men and boys from Australia and New Zealand in the cauldron of fighting later known as the Great War, the war that was meant to end wars. 'Game to the Last' reveals the story and fate of one group of such men.

Contents:
Maps
Preface
Acknowledgements
Introduction: Never Saw Such a Terrible Time
1. Fittest, Strongest, Most Ardent
2. The Great Convoy
3. The Land of the Dead: Egypt
4. All Very Colourful: Lemnos
5. Lord, What a Day: The Landing
6. To Command Such Men: The Gaba Tepe Raid
7. A Trifle Busy: May
8. How Many of us Will See Home Again?
9. Very Monotonous, being Shelled all the Time: June
10. Making Targets of Ourselves: Silt Spur
11. The Few That Are Left Are Like Brothers: July
12. I've Lost Some More Mates. Mother: The Assault on Turkish Despair (Leane's Trench)
13. It is the Excitement that Takes it Out of You: Counter-Attack at Leane's Trench
14. Too Tired to Write More: August
15. Terrible to Think it was all for Nothing: September to November
16. Many a Strong Man's Eyes Grew Moist: Mudros-Egypt
17. A Man Can Never Escape his Fate
Afterword: When his Mates Return and he is Not There
Notes
Abbreviations and Glossary
Units of Measure
Bibliography
Index