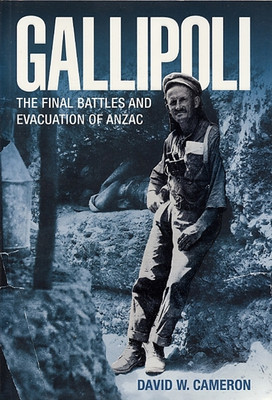 Gallipoli: The Final Battles and Evacuation of Anzac

In early August with the failure of the August Offensive at Gallipoli the senior commanders still believed that victory was possible. To help prepare for a new offensive sometime in the first half on 1916 the allied forces attempted to straighten out the line connecting Suvla and Anzac at a small hillock called Hill 60. This tactically meaningless piece of Gallipoli real estate would cost the lives of thousands of men from both sides over a two week period. Many, with justification would argue that the fighting at Hill 60 was even worse than the fighting at Lone Pine of just a few weeks before. The end result was a huge casualty list for gaining a few hundred metres of ground. With this the Gallipoli Campaign ground to a halt and the unspeakable was being spoken  evacuation was in the air.

Gallipoli: The Final Battles and Evacuation at Anzac is the first book since Charles Beans Official History to provide a detailed narrative of the bloody and tragic battle for Hill 60,along with the other engagements that went on until the very last days at Anzac  viewed from both sides of the trenches. It is also the first since Bean, to examine in detail the planning and execution of the evacuation of the troops from Anzac  the most successful part of the whole Gallipoli fiasco. As in his previous books Camerons detailed research and use of firsthand accounts including letters, diaries, and interviews, enables him to convey the confusion of battle while also.

Endnotes
Bibliography
Index
About the Author