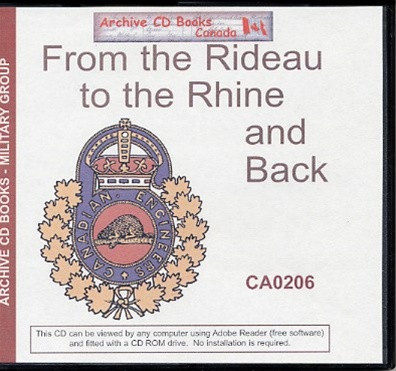 From the Rideau to the Rhine and Back

The week by week account of the trials, tribulations, disappointments and glories of a group of Canadian engineers as they fought their way across Europe in support of the Canadian fighting machine. This is the story of the 6th. Field Company and Battalion, Canadian Engineers, CEF, in the Great War.

Major Weatherbe collected his materials into the form of a diary which brought the attendant problem that some entries have little to occupy them while others could fill a whole book by themselves. Yet he still manages to capture the essentials of the Company's activities, both at a battalion level, and at the level of the individual sappers, in a manner which moves along and carries the reader with it. One of the most distinguishing features of this book is that it recognizes the "other ranks" as individuals - a rarity at the time this book was written - so that they receive as much attention as the officers.

The book is completed with a "Nominal Roll" of all those who served and was as accurate as the official records allowed.