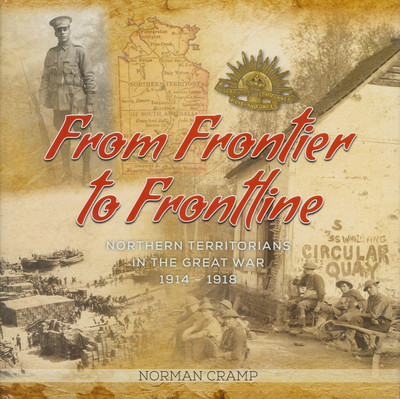 From Frontier to Frontline: Northern Territorians in the Great War 1914-1918

This book is a unique and valuable contribution to Australia’s Great War legacy. It is the result of decades of painstaking research. With no army recruiting centres in the Northern Territory itself, would-be Territorian Anzacs paid their own way to enlist in other Australian states. Indeed, many, such as Albert Borella, VC, undertook their own long and epic journeys. For this reason, until now, there has been no separate list of Territorians who served in World War One.

More than 330,000 men, from all walks of life, left Australia to serve in the Great War. But of all the regions who sent men, none can match the colourful assortment of recruits from the Northern Territory. Drawn from numerous nations and many races they shared a highly adventurous spirit.

This book contains biographies of 372 men from Northern Territory who joined the war to fight for their country in WW1. Amongst them you'll find outback adventurers, bushmen, stockmen, miners, seamen, meat workers, senior public servants, even a pearl diver, a buffalo shooter and a rubber planter.

Set against the backdrop of the Great War and its aftermath this groundbreaking work details the lives of the men who served, their fortunes and their fate.

CARR: Frank.
No. 488. Private. 9th Battalion. Enlisted 27/08/1914. RTA 8/10/1918
Carr had arrived in Darwin in 1912. He joined the AIF in August 1914 and left for overseas duty from Brisbane in September 1914 aboard HMAT Omrah. He was a single, twenty-four-year-old labourer who nominated his father, Patrick Carr of Masterton, New Zealand, as his next of kin. He returned after the war and died in Darwin aged thirty-six years in 1924. He is buried in the Gardens Cemetery, Darwin.

Contents:
1. Long-Lost Heroes
- Some Indigenous Territorian Enlistees
- Multicultural Territorian Enlistees
- Tragic Fates
2. Colonial Outpost
- Early Darwin History
- Territorian Enlistees
- Australian Life in 1914 and the Australian Soldier
3. The Australian Foreign Legion
4. 1914 First Victory and AIF to Egypt
- Formation of the AIF
- The AIF in Egypt
5. The Dardanelles: Australia's 1915 Baptism of Fire
- The Field Ambulance
- Territorians at Gallipoli
- End of the Campaign
- The Originals
6. 1916 Mud and Blood
- Fromelles
- Pozieres
- Conscription Debate
- Winter Sets In
7. The Miners, the Other 'Diggers'
8. 1917 The Angel of Death
9. 1918 The Ware Drags On
10. Those Who Served
- Australian Imperial Force Service Numbers
- Australian Imperial Force Medals
- Those that Died: Roll of Honour
11. The Aftermath
- Post-war Darwin and Formation of the RSL
12. A Lasting Memorial
Sources
Index of Individual Entries